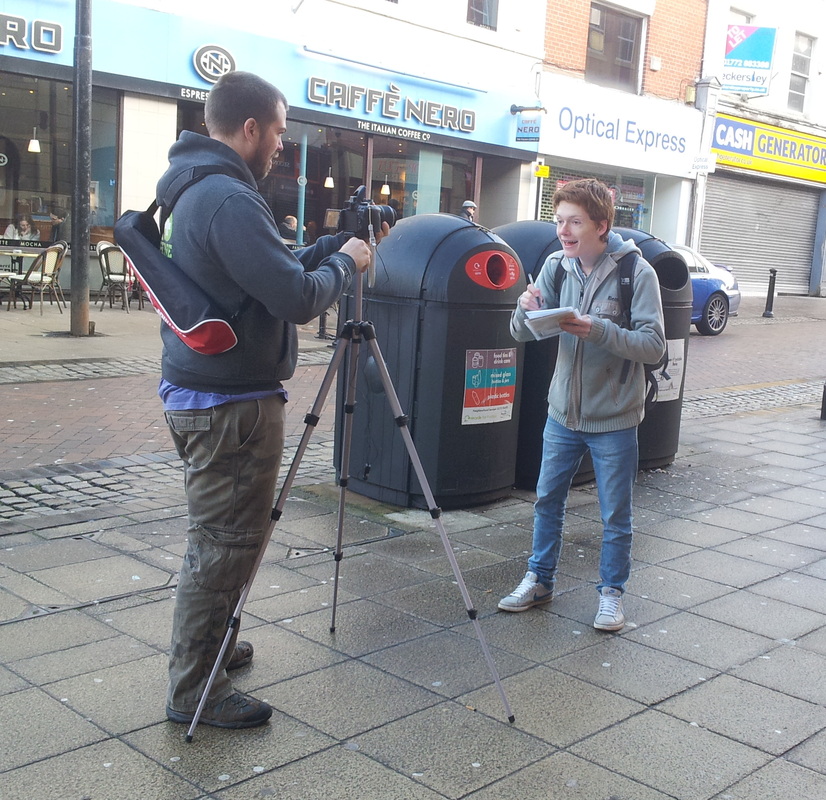 1 camera, lots of leaflets, plenty of survey questionnaires, 5 volunteers (and 3 kids, along for the ride…) The aim? Talk to people in Preston city centre and make a short film along the way. Find out how we as a church can serve Preston and also discover what people know about Jesus

The day started with a sheet of ice covering everything; pavements, roads, cars. Especially cars, as I spent 15 minutes defrosting ours, only for the windscreen to freeze again! Anyway, we met at a city centre conference venue (Ben’s university room kitchen) and headed out.

“Excuse me do you have time for three quick questions?”

Some people are up for chatting, others not. Probably about 40-50% success rate. One guy was interesting:

Q. “We’re starting a church, do you have any ideas how we could serve people in Preston?

A. “Could get rid of the homeless people for a start.”

And it went on. Most people were really friendly though. Met two separate groups who’ve come through All Saints so really good to hear about the good work they’ve been doing. I think the highlight was a group of Romanian men who could speak about 3 words of English between them and still wanted to help out. I ended up on the phone to one of their friends who spoke as much English as I speak Romanian... so that was a comical, slightly awkward 5 minutes!

No one wanted to be filmed! We gave people the option and most were happy to go through the questionnaire with us but didn’t want to be in front of the camera. We put this down to a couple of things. Firstly, it was ridiculously cold and the streets were fairly empty. No one really wanted to be outside and those who were there were going somewhere, quickly. Secondly we‘ll go in with some kind of banner identifying us next time. Something to make it clear we’re not after anyone’s money and aren’t running a scam!

So all in all it was a good morning. Lessons learned, fingers defrosted, looking forward to next time in better weather!