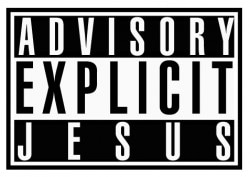 So then, just as you received Christ Jesus as Lord, continue to live your lives in him, rooted and built up in him, strengthened in the faith as you were taught, and overflowing with thankfulness. See to it that no one takes you captive through hollow and deceptive philosophy, which depends on human tradition and the elemental spiritual forces of this world rather than on Christ.
Colossians 2:6-8

We've been running a series of tweets answering the question "Why #ExplicitJesus?

In this post we're going to look a little more deeply at the answer to that question. As a church we've been running a teaching series called Explicit Jesus. It's designed to spell out clearly who Jesus Christ is and what he has done. Looking back through the diary it appears we've been working through #Explicit Jesus since the end of January; that's a lot of talks! There are often two camps people fall into when hearing this. Which one would you fall into (if either of them?!).

Camp 1: You may be tempted to ask the question "But why spend so much time on one person?" or  "Aren't there lots of other issues to talk about?"

Camp 2: You might be thinking "That's great for people who aren't Christians, I'm sure they'll get a lot out of that, but it's not for more mature Christians"

If you fall into either of those camps this post will hopefully clarify things a bit. In fact, if you look closely at the quote from Colossians 2:6-8 and just dwell on that for a while you'll probably see why we've spent the last 6 months looking at who Jesus is and what he's done!

Surely they can move on now? Get into the really spiritual stuff?! Haven't they already ticked the "Jesus" box?

But Paul doesn't seem to think in that way. What do they need to do? Continue their lives "in him", put down roots deep into him and be "built up" in him. There is more of Christ for them to know and enjoy and be challenged by. Christians always need to know more of Jesus!

This might seem fundamental, even obvious, to some. However, if there was ever a foundation truth that we need to stay rooted in, it's Jesus himself. Let me ask you, if you are in camp 2, do you think you have exhausted Jesus Christ and all there is to enjoy and know of Him?

Camp 1, maybe you haven't quite grasped who Jesus is. If you're thinking that one person doesn't deserve an extended series of talks, perhaps you don't understand who this person Jesus is? And perhaps you don't understand how relevant Jesus Christ is to every single issue which could be raised, considered or discussed. Throughout the series we've looked at politics, gender, prayer, community and apologetics, alongside themes such as Jesus deity and humanity, the resurrection and others. Let me show you why Jesus is relevant to all of these:

Paul warns the Colossian church not to be taken "captive through hollow and deceptive philosophy, which depends on human tradition and the elemental spiritual forces of this world rather than on Christ."   (2:8). There is a risk that these early Christians would be taken captive, trapped by a philosophy which is empty and based on lies. Ways of seeing the world which aren't true and which will enslave them, not set them free. So what will Paul's safeguard be against this? What solution is there to such lies and deceit?

He points them towards a view of the world based around Jesus himself. Where Jesus is the central philosophical key. A view of all of life which considers Jesus who is God (Col 2:9) who created and sustains everything (1:16-17) and who intervened dramatically in  a sin-ravaged world by forgiving sin at the cross, thereby defeating the forces of evil (2:13-15). Jesus who is now alive and well and leading his people, the Church (1:18) Jesus who is the one to whom past religious festivals or feasts or special days were designed to point (2:16-18). Basically, a worldview in which Jesus is "preeminent" (1:18).

So these are a few reasons we're doing a lengthy series on Jesus. There are many more, which are what we're tweeting regularly at the moment!